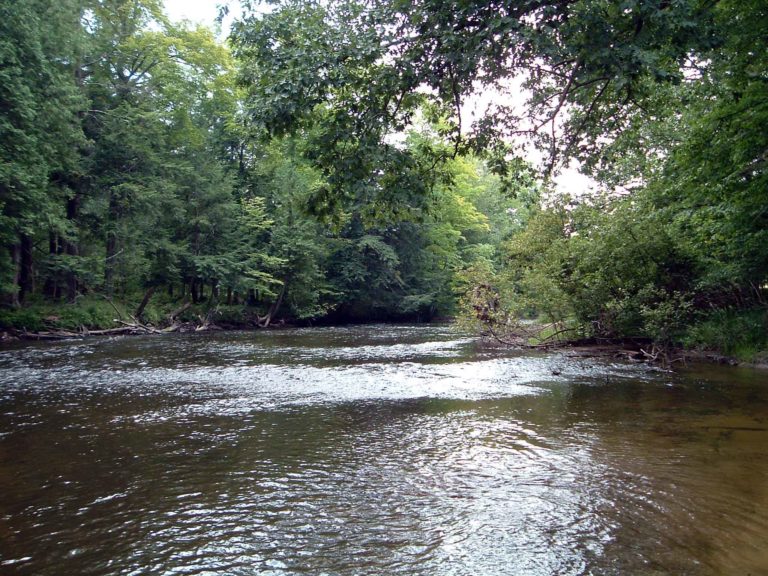 The Pere Marquette River is best known for it’s migratory fishing. It is amongst the finest fishing rivers for Spring Steelhead, Summertime Trout, and Fall Salmon. It runs approximately 44 miles from the headwaters near Chase downstream to M-37. The section of the river from M37 to Gleason’s  Landing is designated as a flies only fishery and is all catch and release. This 8 mile stretch features some of the finest water on the Pere Marquette. The river below Gleason’s Landing is less traveled and therefore, has great fishing with little pressure. The Pere Marquette is also the longest un-dammed river in the state of Michigan and is a 100% free flowing spring creek. In 1978, 66 miles of the river was designated as a National Scenic River.

The Pere Marquette River is a world class blue ribbon stream renowned for it’s Trout fishing and is the birthplace of the first wild German Brown Trout released in the United States.

The Pere Marquette offers some of the largest King Salmon in the region and is one of our favorite rivers for early King Salmon in the lower part of the river from Mid August through mid September.  The better Salmon fishing opportunities then move upstream to the middle and upper sections from Mid September to late October near the spawning areas.

The species of fish located in the Pere Marquette River vary by section of river. The flies only water is loaded with resident trout ranging from 8″ to 12″. The mid section, from Gleason’s to Walhalla has a mix of bigger Trout, Steelhead, and Salmon. The lower section, Walhalla to Scottville  is home to Pike and early King Salmon. 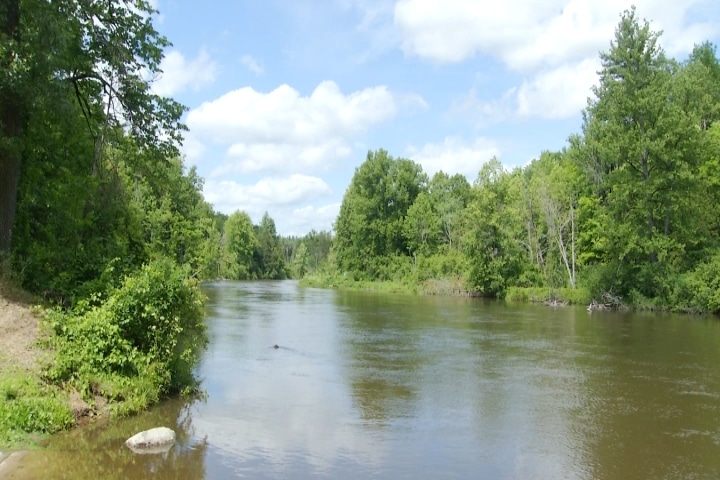 The Manistee River is a scenic and productive river. It runs 190 miles from it’s headwaters located a few miles East of Mancelona to Manistee Lake and then into Lake Michigan. It flows through 7 counties and has 2 dams, the Hodenpyl and Tippy, both owned by Consumers Power.  The part of the river from Tippy Dam to the M-55 bridge is designated National Recreational River.

Trout fishing is best in the upper portions of the river where it is smaller. It gets larger and the water faster as it nears the M66 Bridge. The upper portions, above the Sharon access, are home to a good population of Brown, Rainbow, and Brook Trout. There is also a healthy population of Rainbow and Brown Trout downstream of Sharon.

There are two impoundments on the Manistee River, Hodenpyl pond and Tippy pond. They both host great warm water fisheries with Walleye, Smallmouth and Largemouth Bass, pan fish , and Northen Pike. These warm water game fish migrate upstream from the lake and can be found upstream miles from the impoundments in almost any portion of the river system.

The area below Tippy Dam is most known for it’s quality run of Steelhead and Salmon.  During the year, there is a huge variety of fish below Tippy Dam based upon the season. There are four different Salmon species, Steelhead, Brown and Rainbow Trout, Smallmouth and Largemouth Bass, Pike, pan fish, Walleye, Sturgeon and Lake Trout. The water can be big in areas and caution should be used when trying to wade. The river below Tippy Dam flows aggressively and is better, for safety reasons, to be floated.

Good numbers of Salmon can be caught as early as late August and is in full swing in early October. During the fall season, we can also target Pink, Chinook, Coho, and Atlantic Salmon.

Once the Salmon run comes to an end, lake run Steelhead enter the river system. They will give you a run for your money. 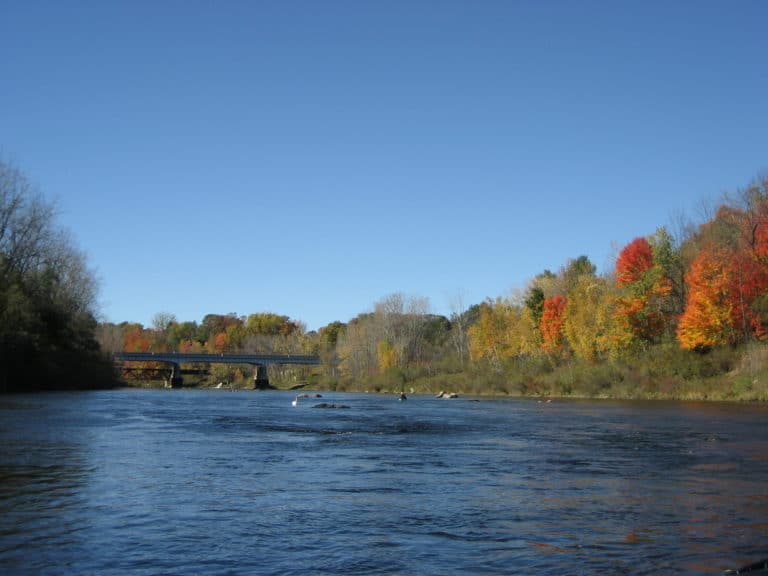 The Muskegon river is the second longest river in Michigan at 212 miles long. The river finds it’s headwaters at Higgins Lake , winds 200 miles and empties into Muskegon Lake which then empties into Lake Michigan. It spans nine counties and has at least 94 tributaries.

Trout, Steelhead and Salmon are the most sought-after fish species in the Muskegon River. These fish migrate upstream every year from Lake Michigan to spawn. The river also has a native trout population, and regularly is stocked by the Michigan Department of Natural Resources and Environment. The Muskegon also holds a substantial Smallmouth Bass population, and some big Pike, Walleye and channel Catfish lurk in its depths as well.

The section of river between Muskegon Lake upstream to Croton Dam offers really good fishing for Chinook Salmon during September and October. Lake Michigan Brown Trout can be captured in about the lower 10 miles (downstream of Felch Street) of stream during October and November. Excellent Steelhead fishing occurs throughout this river section from late October through June. Some Walleye fishing occurs from spring through mid-summer. Good Smallmouth Bass fishing occurs throughout this stream section. Northern Pike can be found in the lower section near Muskegon Lake and marsh. Large numbers of Rainbow Trout and Brown Trout are stocked between Newaygo and Croton Dam. Fishing for the stocked trout is good throughout the year on any type of gear. This river segment is stocked with Steelhead, Chinook Salmon, Walleye, Brown Trout and Rainbow Trout.

Timing is an important consideration when you visit the Muskegon River. Steelhead start running in October, and you may catch them through the winter until early May. Fly fishing is a reliable way to hook up with Steelhead and Trout. Once spring rolls around, catch Trout by using flies that mimic whatever insects are hatching at a given time; various types of caddis and mayfly hatch throughout summer. Summer is the peak time for Bass fishing, and Smallmouths strike spinners, top waters and a variety of soft plastic baits on spinning rods. Fly fishing for Smallmouth is good to great with streamers and top water poppers in the summer months.

The section of stream between Muskegon Lake and Newaygo is relatively deep and best for boat fishing.  The section between the City of Newaygo and Croton Dam is shallower, with a mixture of sand, cobble and boulder substrate. This segment provides good shore/wading fishing. This is a big river with swift currents that requires some caution and wading generally occurs only along the edges of the river. Propeller driven boats can have difficulty in this section of river. Drift boats and boats with jet motors are generally used.